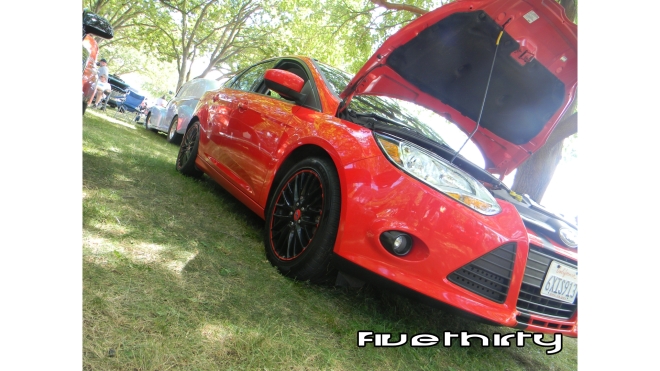 As I had mentioned in my last post, I am going to talk about the Focus. I own a 2012 Race Red Ford Focus SE that has undergone some modifications. For a full review about its current status, please check out Bill’s extensive feature on his blog here: http://officialthreetwenty.com/2014/08/23/4-over-5-joses-mk3-focus/

The way I ended up with the Focus is very interesting. I previously owned a 1993 Honda Accord. As some of you may know, (and for those who don’t) this area is infamous for Honda theft. I was working at Oreilly’s in Orland at the time. My co-worker and I were closing up shop, and a few minutes before closing, a group of gentlemen came in. I had just walked outside to talk to my boss, and saw my car was there. The group walked out and all except for one went in the same direction. My co-worker and I made nothing of it, and went about our closing duties. As we exited the store, I made my way towards my car. I look and the first words I could think of were,”Dude! Where is my car!”

The police were called and we filed a report for car theft. We waited a week, but I knew that my Honda was not coming back. It was probably already parted out and the parts are probably still floating around the Butte/Glenn county area. I knew I needed a car and talked to my boss about work discounts.

A few days later my parents and I made our way to Corning Ford to pick up a dealer used car. We looked at Fiestas and Fusions, but none were appealing to me. I made my way to an orange Subaru Impreza. While it wasn’t an STI, it was a great looking car. I was sold! My parents weren’t too sure about it though.

They asked if there was anything else and that’s when we walked upon a 30,000 mile, used Ford Focus. It was early 2012 at the time and the third generation of Foci had been out for some time. This was the one! I had been reading about them for a while and knew about the DCT automatic transmission issues. The test drive really changed my mind! I loved the feel of the interior, and the car’s quick and nimble feel was exactly what I wanted. A few hours later, she was mine! 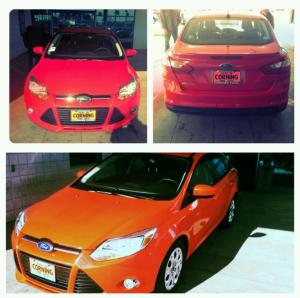 This is the day I got the Focus. Sorry for the Instagram quality picture. (@papaacer by the way) As you can see, it was completely stock. You can’t see it in the picture, but the SE logo actually looked like SF because the E was broken. Luckily, I de-badged it right away. I had already heard of a website called Focus Fanatics because of researching stuff for my previous MK1 Focus. The site helped me in terms of modifications, and I am glad I have had a great source for ideas.

To finish off the post, I have included pictures of the transformation of the car in chronological order. Bill had mentioned all my current modifications, so there is no need for me to explain.  The Focus has undergone many big and small modifications. Some are still one the car, some were thrown out. So, I will do my best to try to show you and explain the changes. 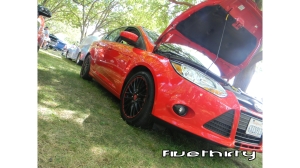 This photo shows some of the modifications that it underwent between the last photo, and this one. I had switched the stripe to the passenger side because I needed to cover up some minor bondo work that a few friends and I had done. (Thanks to Tim and Miguel) The reason for the bondo was a minor hit on my girlfriend’s dad’s flat bed truck. Luckily, nothing happened to his steel flat bed, but my trunk was smashed in the passenger corner. The inner light was also broken. So in a hurry for the car show that the picture depicts, we fixed it the best we could with some bondo, some paint blending, and another modification that same day. The other modification was VMAXX lowering springs. They were a minor 35mm drop. Also in the picture were some new wheels. They were the stock SEL wheels that I had custom painted in black. I added a red vinyl pinstripe as well. The SEL was a trim only available in 2012 that was the trim right above the SE. The highest trim offered in the Focus is the Titanium. What the picture doesn’t show is the upgraded intake system by K&N. I also had the axle-back exhaust that it currently runs.

The current modifications can be seen in Bill’s post as I had mentioned above. I will keep you updated as the car progresses. I have some parts coming this week, so a full write-up will be done. Thanks for tuning in and Godspeed.

A Look Inside the Calgary Automotive Community

For all your Focus, Fusion, and Fiesta parts!