Jose here, and I have finally found the time to give you the car show coverage I wanted to provide. The Fabulous Fords Forever car show was an outstanding time! I was able to attend this awesome show for the first time and might I say, it was the best car show I have ever attended. There was a pre-show meet the night before the show that was very fun to attend as well! I got to meet a lot of Focus owners and got to see some great rides.

Thanks to Ray for the great shot above! I honestly hadn’t even thought about getting a shot like this when I was there. I wish I could have taken more photos to post for this coverage, but I was so busy talking with people that it ended up being placed on the back burner. The show’s gates opened at 8 AM the next day, so it was time to get back to the hotel and attempt to get some sleep because we planned to wake up at 6 AM.

6:45 AM the next day (6 AM wakeup definitely ended up not happening), I pulled into the meeting spot where I met fellow Focus owners Kyle and Ray. We ended up being the only N/A MK3’s at the show, so we decided to meet together at a Starbucks near the entry line for the show. After about 15 minutes, we drove over to the line together and got a very good spot. Once the gates opened, we slowly made our way to our spaces for the day. Boy, it was incredibly hot. For next year there are definitely some necessary items on the list to bring such as: sunblock, some kind of shade, and a lot of water. Anyway, once everyone was parked, the three of us decided to make the trek around the show area to look at as many cars as we could. With 1500 cars there, it would be hard to show off every car there on this blog alone. After some consideration, I decided to highlight ones that stuck out to me most from the show.

First off were the 3 Focus amigos being Kyle, Ray and me. We N/As stick together, and I feel that we held our own. There were a decent amount of people interested in our cars at the show. It surprised me a bit, because of the fact that there were some turbocharged older brothers right next to us. This shows that everyone was all there for the love of the hobby, no matter how fast or slow your car is in comparison. There is always a story behind every ride.

Kyle’s Sterling Grey Metallic was absolutely gorgeous in the sun. He has done a considerable amount of modifications including: A 3D carbon rear valance, RS vents, painted side skirts, and a cool bumper look that most people said was reminiscent of a VW. Ray has had his Tuxedo Black for only a short time as well. He is sporting: Some ST coilovers, an FS Werks cat-back exhaust, and some black and blue matching Ford emblems. Meanwhile, Rossy looks nothing like she does now. She was still in V2.0 haha. It’s a little weird looking at the picture now considering all of the changes made recently. 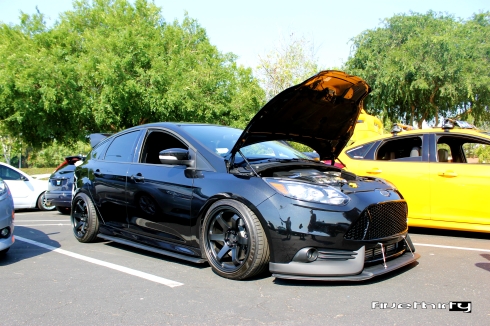 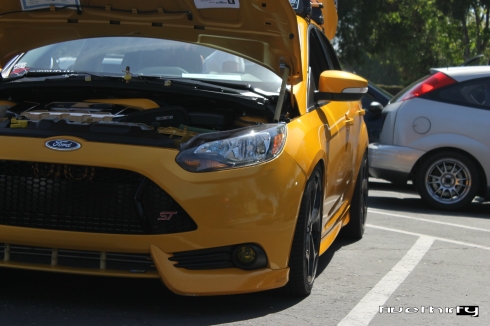 My two Favorite ST’s belong to Brian and Jeff. Jeff owns a Tuxedo Black ST with mods including: Coilovers, a very custom rear valance from RoArt, matte black Fifteen52 cup spoilers, and also fit a Street Scene lip under the cup spoilers to complete the look. He also has a custom matte black rear wing which added to the aggressive nature of the car’s look. The black concave wheels, whose brand escapes me unfortunately, really finished up the look.

Brian’s “Tiki Hatch” really catches your attention anywhere you look on the car. He literally has tiki-style accents visible in some way everywhere. Like Jeff, he has some custom mods as well: Fifteen52 cup spoilers (He was the first to fit a lip under them, but an unfortunate accident knocked it off), an FS Werks intake, a bike rack, coilovers, and custom painted black stock ST wheels. The wheels also had a yellow pinstripe accent on the outer rim to match the car’s color. Both of these ST’s were really a big inspiration for me when I decided to go ahead and do the ST bumper on my own car.

On the Fiesta side was John’s ST. I honestly did not know this was his car, as I had only seen it on Facebook prior to this and only recently gotten to know him better. I didn’t exactly see him at the show while I was there, just his car. Anyway, his ST was sporting some awesome red wheels, and other small red accents throughout the car. The front splitter he had made the front face look even more aggressive than it already did. It also had a small carbon fiber hood scoop that was really cool to see in person.

Confession time, this Cortina was an absolute show stopper for me. It had a turbocharged straight 4 DOHC engine, and listening to it when leaving was really something else. The car was absolutely slammed and had some fender flares to help with the slammed look. The spoiler was a nice addition and rather subtle. It had some cool hood vents and the interior was a very nice red that contrasts with the look of the car in a good way. It was also rocking a roll cage, because racecar. This was definitely my favorite car from the entire show. 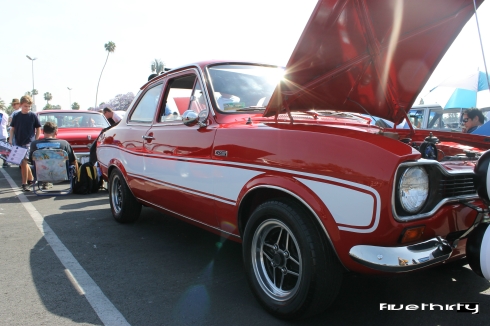 I have always had a thing for these older RS Escorts. Seeing this one in red really made it stand out from the rest. It also had a turbocharged 4 cylinder engine, and was an extremely clean car. 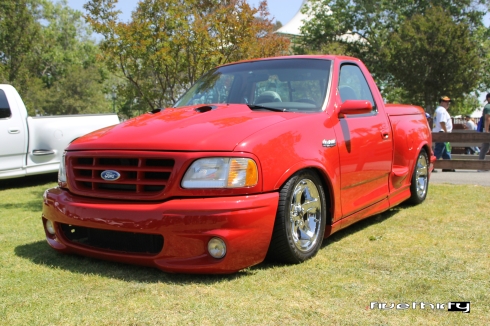 As we made our way to the trucks, these two pictured above really caught my eye out of the group. The Red F-150 Lightning, which is a truck I’d love to own one day personally, was absolutely stunning. Even though it looked completely stock, (as far as I knew) it was a great looking truck. It’s not all  just looks either, as the 5.4 supercharged modular engine packs a whopping 380 HP! It definitely has the go to backup the look!

The Blue Raptor was wrapped in blue chrome and tuned up by Roush. The truck was also a project by Galpin Auto Sports. It has a lifted suspension, gold aftermarket wheels, and a cool bumper bar with an LED bar. Next up, I want to share some random cars that caught my attention below. 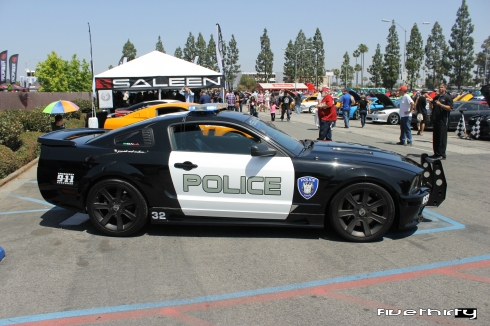 This Saleen Mustang above was actually the one used in the first Transformers movie!

This old timer had a state-of-the-art suspension at one point in its life. Just look at it! 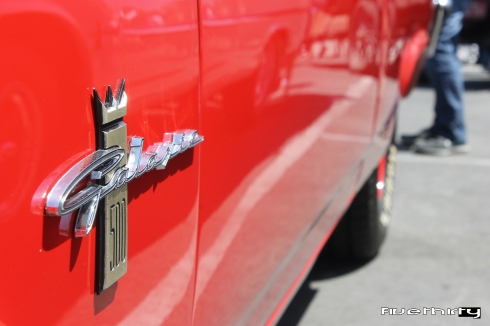 A nicely restored Galaxie 500 that had a remarkable paint job and looked very clean.

The Pinto pictured above was super clean! I had never really seen one that was done up quite like this one at all. The interior was very nice, featuring wood accents.

Now on to pretty much the other 75 percent of the show, Mustangs. Dallas told me that they always hold a very large presence. 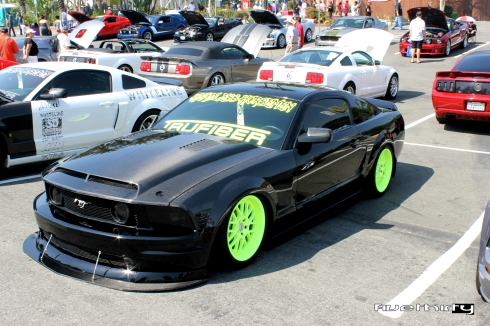 To start off with them was this slammed Mustang. I honestly can’t believe how low it was, and I sincerely hope it was bagged. I couldn’t imagine it being on coils alone sitting this low.

This Saleen was completely made of carbon fiber! It was really amazing to see it in person. It’s probably very expensive too. 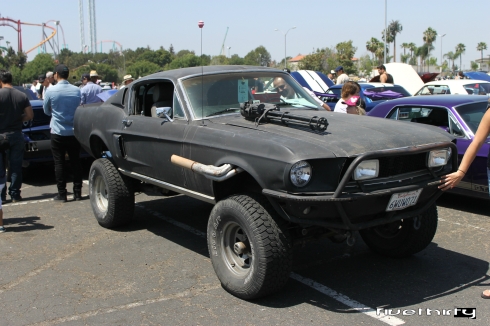 With the slammed scene being so popular currently, you rarely ever see anything lifted that isn’t normally designed for off-road use. As such, this Mad Max-inspired late 60’s ‘Stang definitely caught my attention for it’s unique appearance. 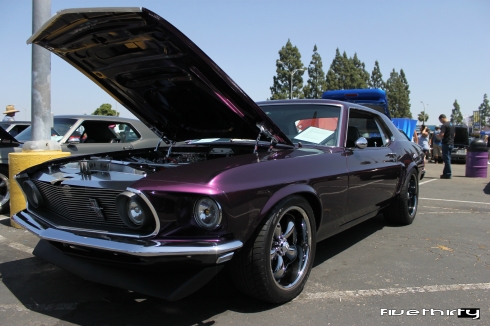 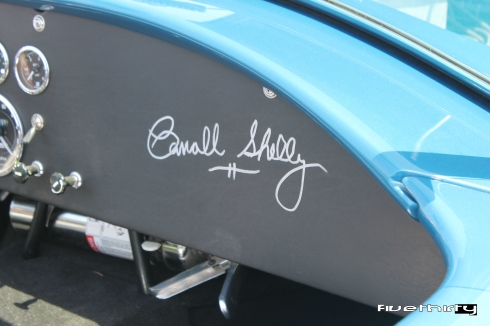 My girlfriend’s dad requested some pictures of older Mustangs, rat rods, and Cobras if I could find them. The Mustangs were not hard to find. Unfortunately, there were no Rat Rods at this particular show. There were Cobras, which were very much a sight to see. The two pictured, from what I was told, were actually true Cobras. I guess I didn’t realize that there were a lot of kit cars designed to resemble and recreate Cobras. The first blue one pictured at the top of the group was a 1965 427 Cobra. Properly named because of the 427 cubic inch V8, it was a very nice car to see. The owner has kept the paint flawless, and the interior was amazing to see.

The second light blue Cobra had a signature by Carroll Shelby himself that you can see in the pictures! I don’t know if this had something to do with authenticity, but there were multiple Cobras there that had his signature featured including the second blue one pictured. (Editor’s note: Carroll Shelby’s signature is somewhat valuable today, especially now that he’s passed on. Throughout his later life, he did sign quite a few different Shelby-inspired or designed vehicles, so it’s not uncommon to see his legitimate signature on various cars or diecast models. You can find different examples of this on eBay if you’re interested in checking it out yourself.)

I end with a picture of Dallas’s engine. Hopefully, my next post will give you a nice chunk of information about the build he’s made so far. On that note, have a great end of the week and Godspeed!

A Look Inside the Calgary Automotive Community

For all your Focus, Fusion, and Fiesta parts!